The huge piece of iron was ploughing through the foams during a day. I bought the cheapest ticket so what I had was a small corner in a room with a tatami. I was cruising on the rug-covered corridors of the ship as the only foreigner. The Korean and Chinese passengers invaded the impromtu grilling corner and its plastic tables, chairs set up at the stern of the boat. The fun lasted till dawn. There was great fuss in the gambling room as well as in the canteen. In the end, everything quietened and the only thing left was the silent background music of the ploughed foams.

Next morning, not long before landing, I made a last visit on the deck. A gentleman was playing saxophone at a corner, quietly practising in the refreshing wind. 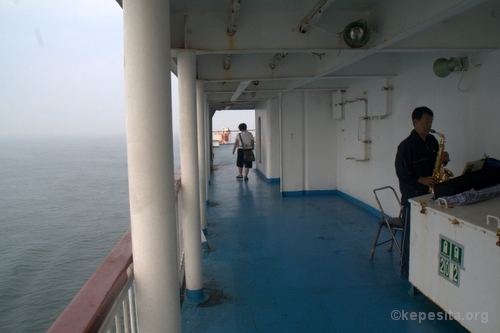 The Irani and Pakistani visas in my passport caused some trouble at the queue otherwise going fine. An officer nicely asked me to wait – these countries are threats to Korea, that’s why a little inspection is necessary. In a few minutes I was already at the information counter of the main terminal, looking for a map.

I was planning on taking a bus out of Incheon and hitch-hike to the capital that very day. As it turned out, hitch-hiking wasn’t needed at all. The two big cities have grown together throughout the times, the two metro networks thus creating a maze. A gentleman stepped to me and offered help.

The Korean Sun Young was on the ferry, too. He studies acupuncture in China. We were walking toward the metro station together. He helped me change money, then invited me for lunch. Whereas I was enjoying the icy pasta delicacy using sticks, Sun told me about the two Koreas.

…He compared South-Korea to Sodom and Gomorrah, considering his home slave to the U.S. However, North-Korea is the paradise itself – he said. In reply to my question he told me he had never been there; but once he’s done with the Chinese studies, he would flee across the border and would be living and curing there…

It was him who told me that in Seoul, anti-USA riots happen on a weekly basis, which often result in clashes with the police. I didn’t and still don’t know what to believe of what he said. His weird gestures or uncontrolled laughters now and then did not boost his credibility and sometimes I wasn’t even sure if he was completely aware of what he was saying. Perhaps he was just fooling me. Nevertheless, to me he was very kind and supportive. He gave me directions on the metro, then we said goodbye and he took the train to a small town near Seoul.

I failed to find a couch so I went to a fairly cheap hostel. Well, the days spent in China were over, where both hotel and food were at an affordable price. In Seoul, I payed about 15 dollars for a bed. 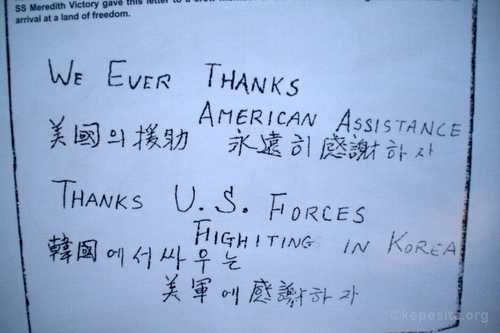 When in 1950 North-Korea attacked South, American troops came to the southerners’ aid. They have remained here ever since. Many people are filled with ease by this, as the relationship between the two side of the demilitarized zone has always been tense.

Since the war, the two Koreas have ’progressed’ in a rather different direction. The North became isolated, only a few rumours fleeing across the border now and then. South, on the other hand, jumping on the American horse, has seen a rapid development and today is one of the richest, modernest countries.

Walking in the capital, I always felt some kind of ’disturbance in the force’. Like I was in a weird place where ’hamburgers are eaten with sticks’. In a country where the number of crimes is the lowest but that of suicides is the highest. People wait in line at the bus stops but they get on and off the metro cars simultaneously, holding each other up.

I met Steph, who hosted Kenneth, Alex and I back in Beijing. We walked down to the river-bank and talked there, staring at the fishermen and the dead fish floating on the surface.

Late in the afternoon I went around the city. 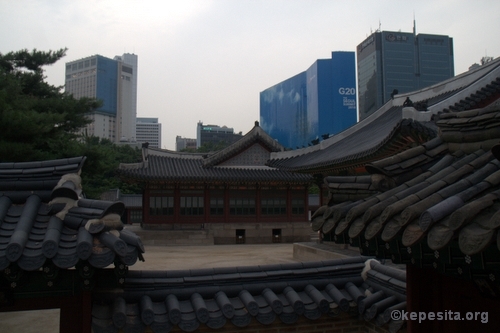 The hundreds-year-old wooden building-complex, the Deoksugung palace was submissively hiding at the feet of the huge skyscrapers. The sculpture of king Sejong maybe was once admiring river Han – presumably, today it is forced to watch the bathroom secrets of the boss of Kia.

This wasn’t supposed to surprise me that much as we can witness it elsewhere. Sill, there was ’something wrong’ with Korea. Maybe with me.

I walked to the prison-like building of the American embassy close to which I found an outdoor photo exhibition commemorating the Korean war. The collected material have been damaged many times throughout the years, but have always been restored. Apparently, not everybody feels unconditional gratefulness. 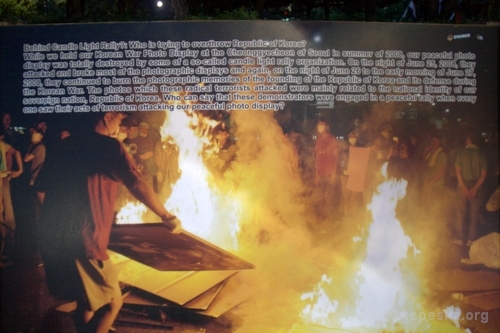 I took the metro and got out of the city. Leaving the vast forest of tower buildings behind, everything turned green. The humid air stuck among the hills was present as the clumsy forerunner of the cloudy sky’s message of rain.

When it started raining, I took cover at a bus stop, when it ceased, I waved. Two ladies waiting for the bus were my silent company… The bus didn’t seem to want to arrive. So when a car pulled over, they asked to be let in as far as the next small town.

On the road leading to the Eastern coast, I revived. The hitch-hiking went just great. Though the Koreans don’t hitch-hike –whoever gave me a ride, their very first thing to say was that I shouldn’t hitch-hike in Korea because people wouldn’t dare stop-, everyone knew the reason why I was standing at the edge of the road, holding out my thumb. And everybody has heard of Hungary (supposedly, Hungary was the first one out of the Middle-Eastern-European block to seek diplomatic relations with South-Korea). In many Asian countries I faced constant challenge when trying to explain what my business was there, what I’d like to do, what country I’m from. In Korea, I didn’t have to worry about that. Amongst the beautiful, green hills and mountains the nicest people drove me eastward. 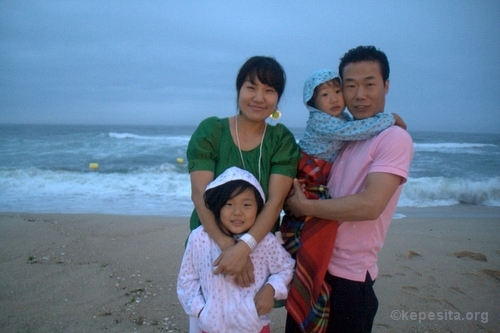 To my surprise, even a young mother, with two little kids in the back of the car pulled over. After a few kilometres she turned in front of a house where ’we picked up’ her husband, now the five of us gliding toward the coast. As we reached the town of Gangneung it turned out they were about to have dinner with their friends in a coastal restaurant – I was welcome to join them. That evening was a rapid course in Korean culture and cuisine – with lots of laughter. From the plates covering the table, the most diverse sea-animals were staring at me with glassy eyes. Some of them were on salad bedding, others on ice dragée, some in bubbling soup. We drank beer and soju (a weak kind of rice spirit) to wash it down. This is where I learned the most basic and seriously taken gesture of courtesy and respect, i.e. –mostly toward the elderly- we turn to people with two hands. The gentleman sitting on my left offered me soju. I held out my tiny cup to him – with only one hand. The correction from the right came immediately – the husband whose car I traveled in, explained to me in a friendly way this basic, Korean piece of etiquette. I didn’t make that mistake again. 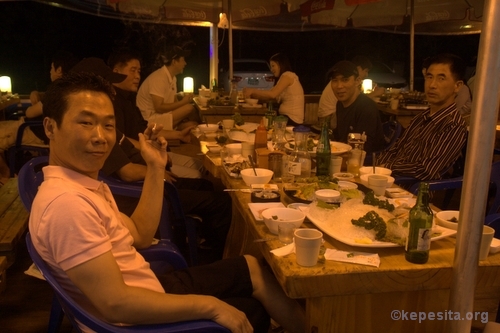 I was on the point of saying goodbye – thanking them for the unforgettable dinner and ride- but they had me sit in the car once more. That night I was planning on sleeping in my tent since on the coast it’s not hard to find a proper spot, plus, I have never felt anywhere as safe as in Korea (only later in Japan). In spite of that, I soon found myself in a hotel room for which the married couple payed in advance…

Not counting the ferry ride, I haven’t been this close to the sea since Lebanon (7 months back). And now my window looked out on the Eastern-(Japanese-)sea. At dawn I nervously watched the final of the world cup, sent a congratulatory email to Alex (who followed the game with attention in Hongkong), then fell asleep, enjoying the sounds of the battle between the sea’s attacking waves and the sandy coast. 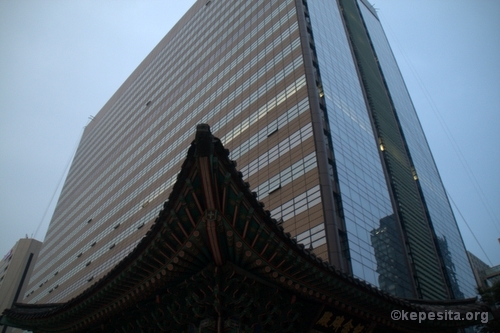