Hem was a calm and straightforward man, whose view on life could be a solution for those, for whome work and private life cannot be harmonised easily. Hem is one of the leaders of an agency that organises trips to Bhutan, India and to the mountains of Nepal. He is also the head of a humanitarian, non-profit organisation (www.sfuonepal.org). And he is a father. And a couchsurfer.

We talked about the upcoming Maoist strike and also about Tibet beside a cup of tea. There is no legal way to Tibet aside from the organised programme with a guide, offered by a travel agency. As an illegal move (e.g. fleeing from the group after crossing the border) would not just have endangered my trip in Tibet, but would have probably resulted in being banned from China as a whole, I decided to stay away from it.

Hem was able to have us as guests for one night, a Dutch couple was waiting for the couch the day after. Thanks to his business connection, he was able to get us cheap accommodation in the centre of the city (we paid ca. 1.5 dollars per person per night). 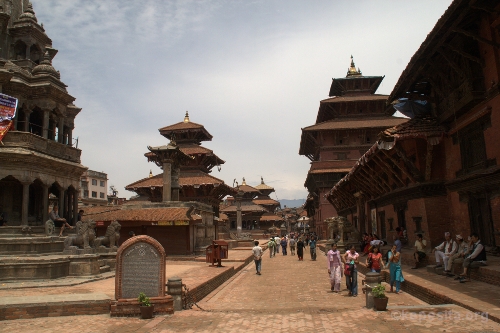 From morning until late afternoon we walked the streets of Kathmandu. The Maoists gathered in small groups in various points of the city. They either danced or sang or stood beside a “leader”, who used a loudspeaker, and sometimes they clapped their hands or yelled in order to express their approval of what had been said.

In the afternoon a larger group set out from the centre. They marched for hours, making a huge circle around the capital. There was a pick-up truck going in front, behind its loudspeaker the (probably) “well-spoken”, and the leading party members.

After walking around the city for hours, we were weary as we set down on the edge of the sidewalk. Some people mentioned some kind of a march with torches, as an event that would close off that day’s strike. It was already getting dark when we arrived at the premises. As about a hundred of us were waiting on the stairs of an overhead crossing, a ca. 8 year old boy also appeared. He had a nylon bag in his hands, from which he was sniffing liquid glue – he probably bought it in one of the paperware shops. He didn’t even surprise anybody. He watched the people gathering at the crossing, but I am not sure what he was able to see with his blurred eyes

On the other half of the square the people started to scream passionately when the torches turned up from the back of a few vans. They handed out a few hundred, perhaps even a few thousand. The rags at the end of the bamboo sticks created huge flames. The fire, its spectacle ha an amazing effect on the people, who were tired from the day-long walk. Some started running and yelling on one of the main roads. Burning rag pieces flew all around, the smoke became more and more unbearable. We followed the fire march, which – after a larger circle – returned to the original place. The torches were collected and the people gradually left for home. 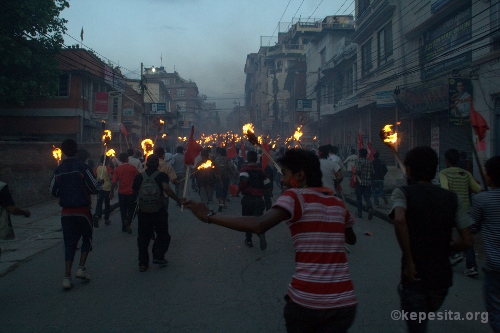 The strike lasted for about a week. Following the demonstrations – virtually becoming part of it – we discovered the city, as well.

The Maoist sympathisers were mostly from along people living in the countryside. Tens of thousands were called to the capital for the 1 May celebration, in order to demonstrate their strength and force the ruling Communist Party to resign. The red-shirt and red-flag Maoists, who flooded Kathmandu, reportedly came with two weeks of food in reserve, drinking water was supplied by the water trucks provided by the party. Most of them slept on the streets.

Transport stopped in the whole country. All the shops in the capital closed, the shutters of the hotel rooms sqeaked only occasionally, as well. The roads of Tamel discrict, which are full of souvenir shops and have a lot of visitors day and night, became grey because of all the closed shutters. The silence of the buildings was, however, not the sign of the sympathy of the townspeople. If anybody opened, they had to deal with the displeasure of the Maoists.

We could discover some sympathy (or perhaps pity) among the townspeople (mostly among women): the sweaty bodies marching in the sun sometimes received a relieving shower of water from the windows. The masses greeted the care of their “mothers” with a cheer. 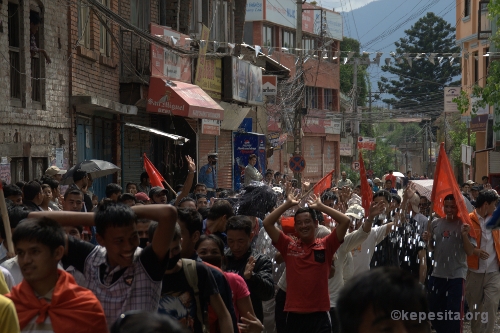 All transport stopped, but some restaurants did open secretly, however, their supply of resources was limited. The offer of food was minimal, and day after day even the quality deteriorated significantly (our stomach indicated its displeasure).

On certain parts of the city, in the major intersections there was, however, much more life. From time to time smaller groups turned up to march on various points of the city. On such occasions you could first hear the yelling, the passionate march, which was followed by the closing of the shutters on the street they marched on and the vanishing of people from the streets. The police and the UN peacekeepers were present at almost all corners. They were in full control of the situation in the capital. Outside of Kathmandu, however, you could hear news about smaller clashes

The strike, that got more and more tired by the day, got its final blow by the peaceful counterdemonstration by people from the capital. The people, who had enough of Maoist “terror”, marched in infinite numbers. I haven’t seen even nearly so many people in any Maoist gathering.

The strike ended that night. Although there were some small and large demonstrations in the coming days, the tired strikes, who spent days and nights on the street, slowly returned to their homes. 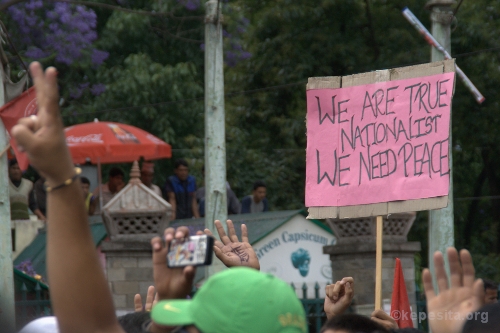 After asking a bit around (which direction one should take when going for a hike around Kathmandu), we packed our stuff with Alex and started walking from the city, towards the east. We climed a hill with parks and then continued in a more rural setting. We followed the hedge running on the side of the chain of hills and – although there was always a nice view of the capital – we expected that the valley will eventually disappear and we can get lost in “untouched” nature. It only turned out when reaching the last hill of the chain, that we are on a chain of hills, that ends deep in the Kathmandu valley, that is, instead of heading towards the mountains emerging around us, were were in fact walking towards the heart of the city.

There wasn’t much to do, so we walked back on the chain of hills, being sure that we will eventually reach the mountains from the other end. Well, this didn’t work, either. The other end of the chain did not lead to the mountains, either, but rather to Kathmandu-valley, or at least a flat and inhabited area. It was late afternoon and the mountains still seemed far away. Although that they we have already demonstrated our talent for hiking and sense of orientation, we didn’t give up and continued in the valley – finally aiming at the mountains we had set out to see. Thanks to a small pick-up truck, we reached the foot of the mountain fast, where we stopped for a tea in a small store. Rain started to pour down heavily. 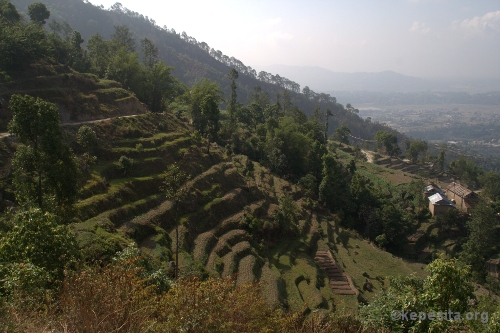 We had a sleeping bag, but no tent, so we started to ask for some shelter. This is how we met Rupchard, the 17 year old boy from Nepal. A German couple supported him through an international project, so he was able to go to school. He spoke English and he offered to help us. He told us to follow him and this is what we did, even though it was not clear yet where we were heading.

As we were walking upwards, I saw a cave in the side of the mountain. In order to make things clear, I showed it to him, saying, we only need some shelter over our heads. Two things turned out from the answer. We will spend the night at Rupchard’s family, and the cave is visited at night by tigers, to “do their thing.”

At the stops of the mountain climb, we were able to get to know half of the village. The small boys doing gymnastics on the iron rods over the abyss, but even the old men in rice schnapps delirium greeted us in a friendly way. Rupchard, laughing, asked us whether we can guess why he had 7 sisters? His father wanted a boy...

By the time we reached the house it was dark – it was hit by a blackout and so had only dim lights. As we entered the only room of the lower level, I was hit by a warmth that I only felt back when I was a child attending religious class, and imagined the place where Jesus was born. In the right corner there was a brown cow, and with his calm brown eyes, that were in a trance due to the rumination, he observed us in a kind way. Behind him, in the shadow of the stairs there were 3 goats, eating in silence. On the left, under the sole source of light in the room, Mother and a number of kids were working. We sat down on the floor in a circle, and were able to enjoy one of the most delicious dinners of our trip this far. We used our fingers as spoons, and ate the rice and the spicy add-ons completely enchanted by the atmosphere, having an immensely rich communication despite the almost complete lack of verbal information exchange. 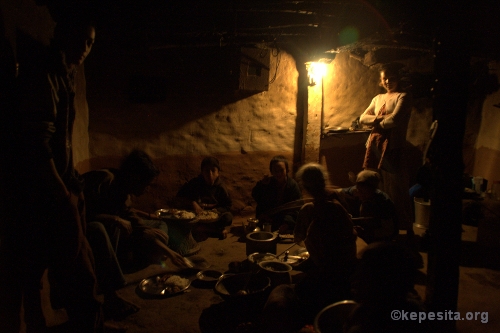 We went up to the first floor, and settled down in one of the corners of the balcony and had a long talk. One of the brothers of Rupchard, a 5-6 year old boy caressed-examined by underarm for minutes, as the underarm of the Nepalese people is free of hair.

They lost their father a few years ago. The man, who served in the army and produced 7 girls and 2 boys, committed suicide. The sisters of Rupchard were almost all married, but in the evening there were so many of them present, that it is still unclear to me, who was related in what way to whom, who lived there and who came just for a visit.

The house, which was surrounded by terrace gardens, was at least an hour of difficult uphill walk from the village. The old Mother probably didn’t really leave the house and its surroundings anymore, but Rupchard, who went to school, and his siblings walked the distance at least twice a day. They were up already at 6 in the morning to get the school bus. Washing at the tap in the garden, uniform, and a shiny black shoe that is adult-sized – I guess in order to avoid buying a new one later on. 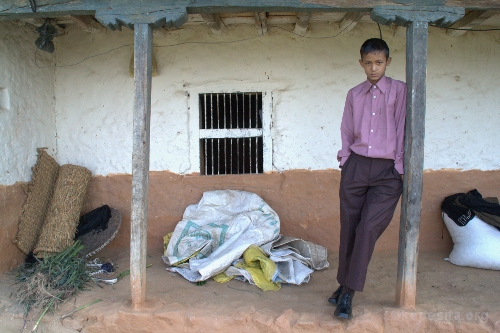 The day after, following Rupchard’s instructions, we walked on the mountainside until afternoon, amongst small villages and terraced gardens, on a winding road. In the end we climbed down to the city, and used the van services that restarted after the end of the strike to get back to the hotel.

A lot of tourists visit Nepal every year in order to hike, climbing the giants of the Himalayas in order to pay respect to the monumentality of nature, or even to try to conquer it. I did not see this Nepal, but I met some of its giant personalities. 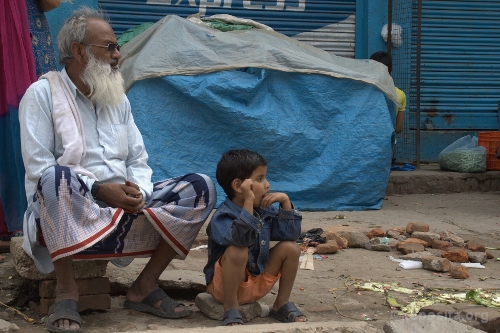