First of all, thank you for all those family members, friends and acquaintances, who assisted us and the Kepesita expedition in any way either in the preparations for the trip or in the course of the first year of the trip. I hope that we were able to reciprocate with the blogs, photos and videos we made in the course of this year.

Secondly: we are ready for the second year!

Summary about the first year of Kepesita

During the more than 250 rides I was afraid once (Boran's ride in Serbia), once I was naive enough to “lend” some money ( http://www.kepesita.org/apps/blog/show/2340772-days-141-147-turkey ), but including these two rides, we only encountered kindness, supportive gestures and endless hospitability.

In Pakistan I travelled with the Norwegian guy, Jogeir, whom I met in the capital of Iran. Partly out of our own resolve, parly because of our lost “freedom” because of the safety measures of the Pakistani police, we suspended hitch-hiking and travelled by train. The hospitability of the people in this feared Muslim country immediately swept away the media-constructed image we had of Pakistan.

There is even a music video of the train ride:

When we entered Tibet, we had to show not only a separate visa but the plane or train ticket indicating our leaving of the province.

On the Iranian side of Beludzhistan police put me on the bus and when they made sure that there are no drug barons among me, they let me go. On another occasion they put me into a taxi.

In Jaipur fate (and a rickshaw driver) brought us together with tax evading jewellery tradespeople. After they showed us the “secret” of how we could make some extra income, they made hints that they “expect my participation”. I escaped.

(English version of the blog will come)

There is only one way of entering Tibet legally: through organized travel. With the Spanish guy, Alex, we paid for a group trip in Kathmandu, and so we were able to visit the carefully – with arms - protected booty province of the “Chinese Empire”.

(English version of the blog will come)

P.S.: In the Chinese city of Golmund we jumped on a tricyle with a synthetiser together with Alex and headed eastwards on the Tibet plateau either riding the trike or hitchhiking. 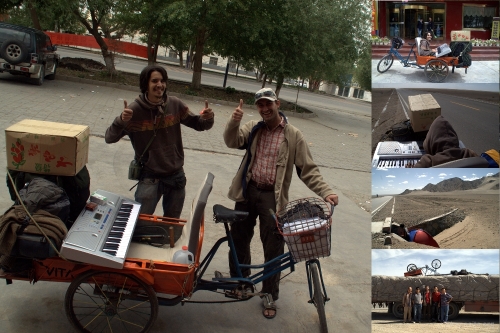 The filming project of the expedition went through a radical transformation. While in the first 4 months we endeavoured to provide a documentary of the trip (filming the most important events in a framework style, with introduction, personal monologues and using these materials in videos to promote our website, e.g. Two crooked thumbs), after Lebanon the video camera started to serve 3 different and partially new purposes: the motion picture support of the Hungarian and English blogs (video blogs –e.g.. Allah O Akbar), short films introducing an adventure or a part of a trip (e.g. The slowest train) and the short films of No Way Pictures, which was established jointly with the music formation PornoSheriff (e.g. Green Peace in Iran), which are built on a cultural, religious or political event.

Our first movie, “Green Peace in Iran” (together with “The slowest train”

got an invitation to the Road Junky Travel Film Festival in Berlin. Right now we are working on a second movie that is centred  around the largest religious festival  in the World, the Kumbh Mela, which is organised in India every 12 years.

During the autumn of 2009 we provided motion picture material for a TV programme that is to be shown in Hungarian public television and introduces hitch-hiking as a method of travel. 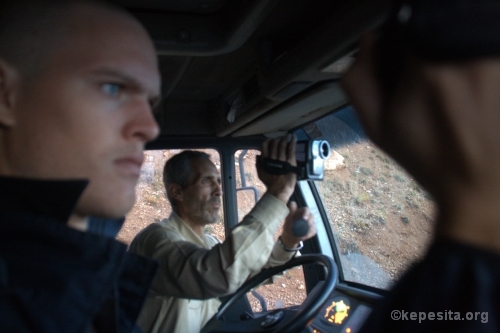 In the course of our first year more than 50 blog entries were created, most of them can be read in Hungarian and in English as well. The Hungarian blog  can be followed at www.geographic.hu as well, due to a cooperation with the Hungarian National Geographic Online magazine.

Besides the photos used to illustrate the blogs, we created photo albums to show the most interesting pictures by country. Also, when we could and got permission, we took a shot of the driver and the car that gave us a ride.

The Kepesita expedition is seeking cooperating partners, sponsors for the successful continuation of the expedition.

The biggest change occurred during our stay in Lebanon.

Already when planning the trip we have anticipated that the time might come when we will deem it best to go on separately for a while as we were about to be locked up together 24 hours a day and a time would come when we would “start getting on each other’s nerves.” This is perhaps unavoidable at such a trip.

During our stay in Lebanon we got an offer, which held out a promise of interesting work and an income that is able to keep the expedition alive. The dilemma was a major one. Two projects (both of them a challenge), two people. If we both continued with hitch-hiking, we might say good-bye to an opportunity, which we earned with our travel philosophy, chance, the expedition itself, that is. If we both stayed and switched to the project in Lebanon, the expedition part would have died away. We have thus decided to part. Kenneth stays in Lebanon and I continue with the trip. In a few weeks’ time it would turn out anyway whether the project in Lebanon worked. If not, Kenneth packs up and follows me. 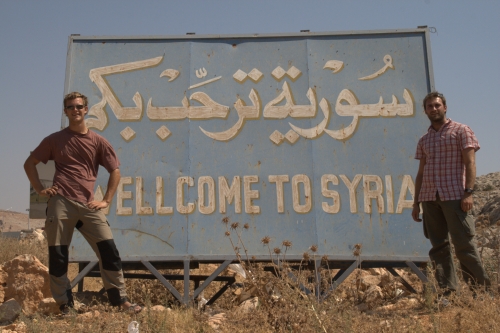 This decision had a huge impact on the expedition, and what we have not anticipated either, has instilled further changes. Since Lebanon we have been on separate paths with Kenneth. Now, however, we are both here in Beijing and are celebrating the first birthday of the Kepesita expedition.

You can read the annual summary of Kenneth here:

After the farewell in Lebanon I travelled for 8 months, sometimes alone, sometimes with company. I met Alex, the Spanish guy in Eruzurum in Turkey. From there we hitch-hiked together until Tehran and later we met in Delhi and traveled together again from the city of Pokara in Nepal until Beijing.

I met the Norwegian guy, Joe, in Tehran. We hitch-hiked together until Kashan, where we spent Christmas Eve in the home of a local sheperd. We met again in the Eastern part of Iran, where we took the train and travelled through Pakisthan.

Right now we are in Beijing. In a few days Kenneth returns to the world of Norwegian crab fishermen. Alex will travel to Sanghai and then to Japan. I could not extend my Chinese visa and so I will need to leave the country immediately. As I have no visa for Mongolia I will depart for South Korea by ferry. Then comes Japan, then hopefully Siberia, Mongolia and then hitch-hiking from North to South through China, Southeast Asia will be the next destination. 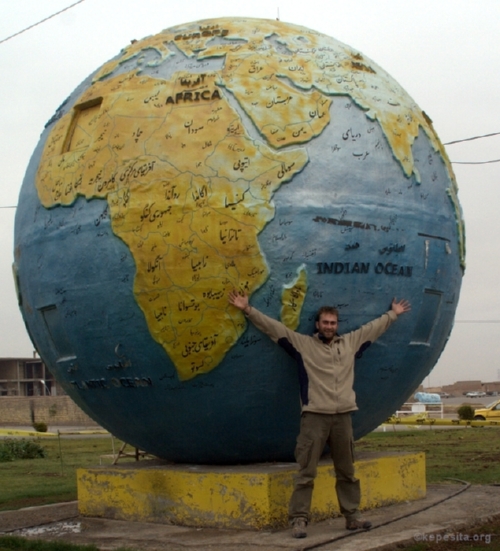