After a night in Sirjan, battling a virus and having restless sleep, I headed towards Bam. The plan was to hitch-hike until Bam and there I would ask around at the vehicles that (allegedly) gather there and go on towards Pakistan.

It didn't take me long to get to Kerman, which is basically the gate of “ill-famed" Beludzhistan. This desert covers the Southeastern part of Iran and the Southwestern part of Pakistan and it is a bastion of drug trade. Trained camels innocently advance as they carry the drugs from one country to another; the Sunnite community demands autonomy and the release of the relatives sitting in prison for smuggling drugs. The Iranian leadership is not really in control of the situation. Since the case of the Japanese tourist who was kidnapped a few years ago, the police forces show increased presence to avoid the attention of the international media at this dark corner of domestic affairs. According to what a gentleman in Bam told me, the kidnapper of the Japanese youth demanded that his relatives be released from prison. He kept his victim in captivity for 3 months and, as he did not accomplish his goal, then he let him go. During those three months there was marihuana/opium induced fun in the house.

Sunset came while I was walking in the outskirts of the city of Kerman. I stood for about one hour at the side of the road when the police stopped beside me. They let me know in a kind way that hitch-hiking is “not OK” here and then they took me back to the city in their car (there was a narrow green ribbon on the steering wheel) and put me in a taxi, which took me on a 2-hour drive to Bam for four dollars. 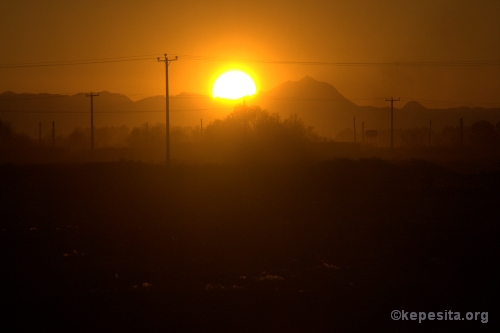 Bam is famous not just because of its historical monuments. In 2003 at Christmas a massive earthquake devastated the city, taking a toll of 40 thousand people. The bulldozered ruins cover whole square kilometers in the surrounding desert. The reconstruction is still on its way. There are new shopping streets in the city centre and they are just about to finish an enormous mosque. Aside from one or two exceptions one encounters mostly temporary, “patched” solutions for residential homes. It seems that only the bank buildings are fully renovated.

One of the largest sand fortresses of the world, which is nearly 2000 years old, has also been damaged/demolished, together with the lovely labyrinth of the bazaar and residential homes around it. Right now a German university group is working on the reconstruction of this historical site. 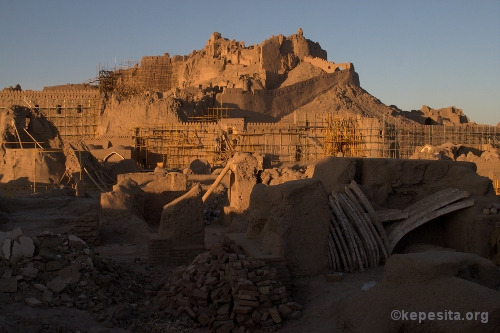 ...AA woke up at the sound of the quake and ran out of the house. As he came out, he turned back and his home collapsed in front of his eyes. He was able to drag his mother from the ruins but his newly-wed sister was killed by a falling iron joist. It cost one arm of the husband but he saved their baby.

After the disaster the aid packages flooded the market in Tehran. As his brother opened the bag of rice bought in the capital, he found a piece of paper saying “For Bam” and a cheque. The tents for those, who lost their homes in the earthquake also cost a good lot of money.

It soon turned out that at this time of year it would be futile to wait for mobile homes gathering here. The bus and the train thus remained as options for Beludzhistan and Pakistan.

During the few days I spent there, whenever I wanted to leave the place I was quartered in, the police had to know about it. AA often accompanied and guided me. He showed me the ruins of the Arg castle and we sneaked in to the working area there. One day, after we had polished a few windows at the place under construction, AA took me to the local school to play ping-pong. I was lucky enough to play against the county champion. I lost. 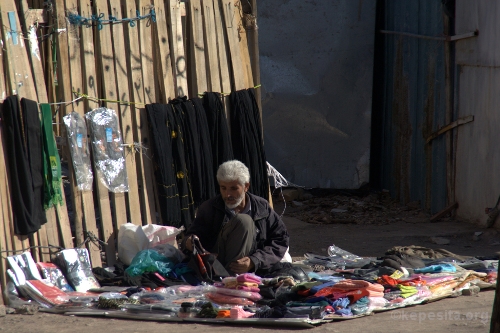 We went over to a nearby little village, where the 100-200 year old date palms provide a living for the people there. The locals, who, at first sight, seem to live at minimum life standards, have (as I inferred) a stable economic background and have their children educated abroad. The several thousand year old well and irrigation system feeds the palm trees (which are separated into groups of 10-20 by walls) endlessly with water. This is the place where I was first able to eat dates from the trees. 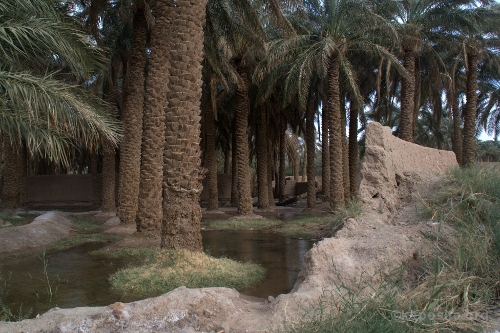 From the border town Zahedan the train goes once every two weeks to the town of Quetta in Pakistan. The next train was about to leave just one day before the expiry of my Iranian visa. We agreed with Joe that I would join him in Bam on the bus to Zaheda. Policemen gave me a free and obligatory ride and put me on the bus. When they made sure that I was comfortably seated beside Joe, they made one more suspicious look at the travellers and then let me on my way. 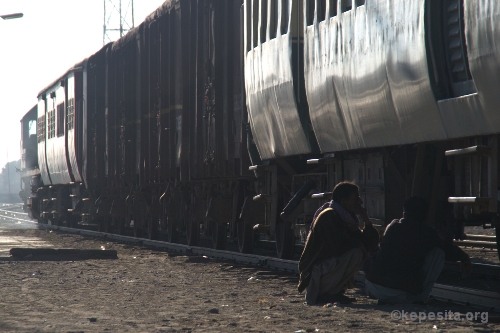